Disorders’ new Rainbow Hand t-shirt range is inspired by the Hand of Fatima symbol. The origins of this ancient symbol can be traced long into our shared history, being used as a symbol of protection from evil spirts. Therefore, I view the symbol as universe belonging to humanity and not just to any one group exclusively. As such Disorder’s Rainbow Hand of Fatima is a universal and powerful symbol of unity and protection from the evil eye.

is made from sustainably sourced organic cotton, ethically manufactured in the UK. The range now includes yoga and street apparel. In order to minimize clothing waste, Disorder only print our apparel to order, in our Birmingham Studio. This will take a little longer, but is definitely worth the wait. 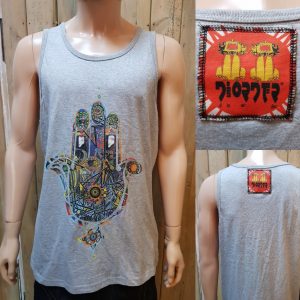 The history of the hand symbol

is a long and fascinating one. Its use as a sign to protect people from the evil eye, predates Judaism, Christianity and Islam. Typically, the hand symbol is represented by the open right hand, an image recognized and used as a sign of protection in many societies throughout history. The Hand symbol is believed to provide defense against the evil eye. In Islam, it is also known as the hand of Fatima, so named to commemorate Muhammad’s daughter Fatima Zahra (c. 605 or 615 – 633). In addition, the Levantine Christians call it the hand of Mary, for the Virgin Mary. Furthermore, Jews refer to it as the hand of Miriam in remembrance of the biblical Miriam, sister of Moses and Aaron.

To summarize, we can trace the origins of this ancient symbol, long into our history. Therefore, it doesn’t belong to any one group exclusively, it belongs to us all.   Disorder’s Rainbow Hand of Fatima is a powerful symbol of unity and protection for all against the evil eye.